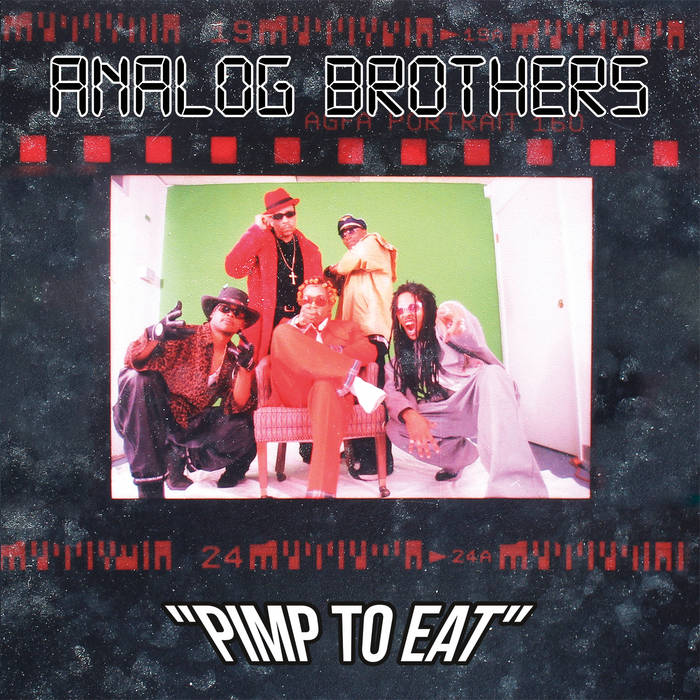 If the Analog Brothers didn’t exist, the weirdest scientist couldn’t have invented them. Or perhaps they never existed. Maybe it’s possible this was all a demonic 31st century hallucination cooked up by Kool Keith and cyborg alien pimps peddling flesh and white fluff acid.

But how else to explain the ultra-rare, ultra-magnetic artifact left behind: Pimp to Eat. Originally dropping from the skies in 2000, it’s being re-released by Mello Music Group, and remains the timeless mind-fuck that it was when it first emerged. It’s a laser beamed synthesized hieroglyphic that could sound timeless in any century or sonic dimension.

There are a few clear things amidst the craziness. The centerpiece of the record is Pimp Rex (AKA Rex Roland), the legendary Angeleno hustler, who did production for Body Count and the chorus on Ice-T’s “I’m Your Pusher.” He enlists his longtime collaborator Ice Oscillator (Ice-T), Keith Korg (Kool Keith), Marc Moog (Marc Live), and Black Silver (Silver Synth). These are the five fly horsemen of the apocalypse, the Analog Brothers delivering digital blows, oscillating sub-tones, and urinating out of windows.

According to Ice-T, the original masters of Pimp To Eat were delayed when Kool Keith’s vocals were stolen during the melee that followed the Indiana Pacers–Los Angeles Lakers NBA championship basketball game June 19, 2000 in Los Angeles. Who knows if this is true? Maybe Reggie Miller was the culprit?

All we really know comes from the abstractions assaulting our eardrums. Rex Roland’s tribute to the old analog sound, eerie synthesizers and pimp-slapping 808 drum machines. Ice-T and Kool Keith trade bars like a rap Scully and Mulder. In the first minutes, the erstwhile Dr. Octagon shouts out George Gervin, swap meets and the Ultimate Warrior.

On “Analog Technics,” the man better known as Black Elvis throws feces at celebrities at the Billboard Awards, sporting Superman underoos, and driving a lime green Corvette. On “More Freaks,” Keith sniffs 8 grams of coke in Calvin Klein boxer shorts, watching Wide World of Sports. While Ice-T panders with Motorola Pagers, eating Grand Slams and asking you to meet him at the back of Denny’s.

This is how it goes across 16 tracks of interstellar pimping. Out of the attics of the insane comes one of the most overlooked rap classics of its era, full of bizarre boasts, ice-cold and meteor-hard beats, and the best bad examples. You couldn’t say no even if you wanted to.